PNA Note: This story is a follow-up to the "17 "story we ran in a previous issue of Highlights. This story is written by Tracy about her experiences on the way to her diagnosis and treatment.

It took 17 doctors to get it right.
Let me tell you all about it.

Fast forward...I was involved in dieting, gaining weight, feeling bad, being off balance, hair loss, slipping on a step and landing in the orthopedic realm with a cracked sternum. Physical therapy did make me feel better, but still not myself. My boss calls me in and suggests I eat less...as he was watching me balloon before his very eyes. And I am not kidding; I tell him I am a fan of grilled chicken, as is my family.

May 2011 "There's no way she has Cushing's disease, it's too freaky and rare."
My Dad puts all of my symptoms in his computer (you know he has a computer) and comes up with something called Cushing's disease for humans, dogs and horses. He then calls my brother who is a physician in another state (very smart I might add) and my brother knew exactly what the disease was (yes he was chief resident) and noted that most docs would not know what it was and there's no way...

May 2011 "At least you don't have Cushings."
My dad calls and I hear the word for the first time...What is that? But it doesn't matter because you don't have it! So, I still don't know what condition has embarrassed me, my family, made me fat and look like I was pregnant, made my tissue-paper thin skin into wounds that would not heal, made my eyes look slanted, make me shaky on a walk...but hey, at least I don't have Cushing's.

June 2011 "May I see your driver's license?"
I decide to quickly drive home after a busy day at work. I feel like I can't breathe, oh wait, I can't... (that breathing thing). I lay down at home, relax and this will stop. I am having difficulty catching my breath. Lying down didn't help. My son, home for the day, questions me and we go to the ER...with service at the car door. I am admitted, I do not mind. Turns out, I have cracked ribs. From? To be determined. So, the hospital pulmonologist says "May I see your driver's license?" What? We fumble around and get it from my purse. He looks at it. "Mmm. I think you have Cushing's disease. Look at your face now. It's called moon face." We'll I'll be. I know that word, Cushing's.

July 2011 "Let me get my college textbook."
After three hospital days and an exit, the hospital stated I needed a follow up with the pulmonologist, so I complied. My cracked ribs were healing. In a very concerned and kind way the middle-aged doc stated he would get his college textbook and we could read about Cushing's. He went to his office. Then we sat side by side, in aluminum chairs in the examination room, and he read to me about Cushing's. Even a diagram. His advice, go to an endocrinologist, that's the next step.

August 2011 "You don't have Cushings, you're just fat. We have had the most success with Weight Watchers."
I head to what is the most respected endocrinologist office in my local town. I got a quick appointment and am thankful. The doc sees me and I relay what the other doc (though not an endocrinologist) has said and he cuts me off. A lot of women apparently come in for a relief from middle-aged weight gain and state they have Cushing's disease. What? How do they know about this disease? I ask "Do you want to see the stretch marks, that I did not have during my pregnancies? Do you want to talk about the symptoms?" I say. He was having none of it. Okay, I leave, embarrassed, fat and wobbly, yet again.

August 2011"Please do not put your urine sample on the counter."
So we are stuck still trying to figure out what the deal is...maybe my kidneys are malfunctioning? This is when I learned what a nephrologist is. The doctor was awesome. By the way, I am the youngest patient in the office and get a chuckle out of this sign on the counter. For me though, it's not the kidneys. Also it wasn't the heart, osteoporosis or even vein disease causing the swelling legs.

September 2011 "Based on these numbers I think you may have Cushing's disease."
Journey to endocrinologist number two in my town. He says he has looked at the numbers and the tests we are doing and feels I may actually have Cushing's disease. At this point I must learn to spell pituitary. He talks about the IPPS and Emory University. He even gets me an appointment there. Also I become a celebrity of sorts at the doctor's office because I have Cushing's! Not many before me!

September 2011 "Should we cancel the appointment?"
The insidiousness of Cushing's disease and the various symptoms and effect on my family, work, friends, and on myself are amazing. We wonder, do we really want to ride through the ATL traffic for another appointment? Well, a couple of days before that, I had been to the wound treatment doctor and told him (perhaps) why my leg and arm wound would not heal. I told him I was unsure what to do next. I left with no expectations. A day later, I received a phone call from the wound doctor who states Emory is the place for you. He had researched it for me! So there's the answer, we're going.

September 2011 "Love it."
At Emory, The IPSS procedure to determine where the pituitary tumor was went smoothly. I knew things were going well as the 40 vials of blood were taken and the doctor stated not once, but twice, "love it."

December 2011 "I told you I would fix this and I will"
I stayed at Emory under the care of Dr. Adriana Ioachimescu and Dr. Nelson Oyesiku for 12 days and I rested and actually didn't mind being there at all. I had total confidence that I would be on the road to recovery when I left there, thanks to their expertise. Of course I thought Cushing's would be undone sooner than they predicted but they were correct...it takes a long time to undo what the slow process of Cushings did. But hey if I hit (by accident) a chair leg or twig, my skin does not break open and there is no blood! I have some old clothes back and have thrown away the Cushing's outfits! I don't have to use a wheelchair at the airport and I haven't been to a doctor in months! Yes, they all know my name, I'm friends with the pharmacist and my kids think I need a frequent patient card with a free flu shot.

February 2012 "You look great."
Back to work...folks don't even actually know about "Cushing's" they just say glad your leg and back are better...way to go on the diet! You look different! I say thanks for the kind words. It's complicated even for me, isn't it?

May 2012 "I had to google Cushing's disease before I came in here."
Back to the suburban endocrinologist who wants to do a final timed blood test to make sure I'm good. I'll go for that. So I think I have hit over 200 vials of blood in this long and winding road. Just prior to the test at the hospital, the nurse came in and said, "I had to google "Cushing's to make sure I did this right."

July 2014 "I had no idea."
It's hard to figure things out when you are sick. It's hard to figure out Cushing's disease even when you are well. I had no idea of the importance of Emory University, the PNA, and a basic education on Cushing's disease. I had no idea of others who shared my experience until I attended the Gentle Giant Award ceremony for Dr. Nelson Oyesiku at Emory University. I hope for a new wave of education so we can see that Cushing's Disease is something more common than previously imagined. That way, not just my wonderful family and friends know about it. And no medical personnel will say they had no idea about Cushing's anymore. 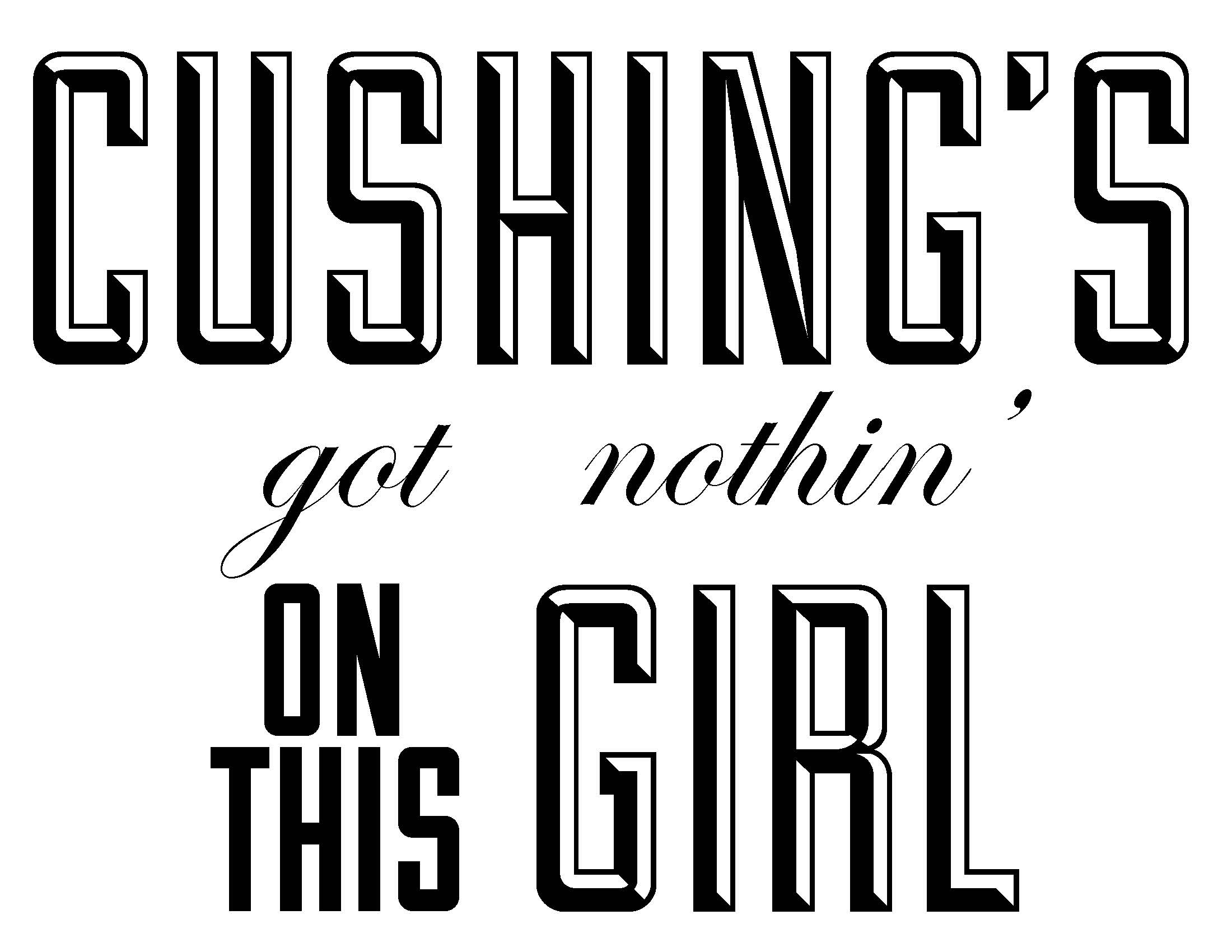 Tracy with Dr. Adriana Ioachimescu and the sign that Tracy's son made for her hospital room door.

Improve Your Quality of Life

Help Us Help You

The print version of the Pituitary Patient Resource Guide is now available! A one of a kind publication intended as an invaluable source of information not only for patients but also their families, and all health care providers. It contains information on symptoms, proper testing, how to get a diagnosis, and the treatment options that are available.